HOW FAR WILL OUR WALKIE-TALKIES TRANSMIT? 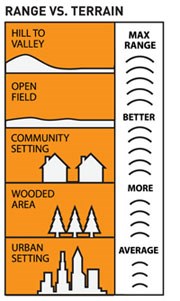 CLICK HERE FOR A PRINTER-FRIENDLY VERSION OF THIS PAGE

All of our hire walkie-talkies have 4 watts power output, which is as high as you will find on any brand of UHF professional walkie-talkie in the UK, or in fact, anywhere else. There is very little difference in the performance of different brands of radio with the same power output. They are all subject to the same laws of physics after all.

The "range" depends massively on where the radio is used.

Radio signals travel from the transmitting radio in straight lines.

So, radio signals might get 2 miles or more in open, flattish countryside.

Perhaps even further in "ideal" applications - such as hilltop-to-valley communications where there is perfect "Line Of Sight" with no hills, trees or buildings to get in the way.

But only maybe half a mile, perhaps even less, in a city with lots of big buildings, or within a large building.

Within buildings, the "range" depends a lot on what the structure is made of: metal walls, or very thick stone or brick walls, can totally block radio signals.

Use of a repeater with a set of walkie-talkies can increase the area of radio communication coverage.

If you need longer ranges, and if the location in which you will use radios has mobile phone coverage, consider hiring our SIM-card mobile network radios, which have unlimited range.

"But I've Seen Walkie Talkie Radios With Advertised Ranges of 10 or even 20 Miles or more?"

They presumably get these figures by testing in very "ideal" but unrealistic conditions, for example as in the diagram, by communicating from two hill-tops several miles apart - so that there is perfect "Line Of Sight" between the two radios.

Of course this gives an "artificially" high range which bears little resemblance to what you might expect in more normal usage.

One limiting factor that affects walkie-talkie range is the curvature of the earth.

The world (as most people know!) is round, and this means that beyond around six miles maximum, radio signals from radios at near ground level are blocked by the curvature of the earth, and that's if they weren't blocked much sooner by hilly terrain, buildings, etc.

Sadly, some radio manufacturers have got into a ridiculous rivalry, whereby they claim bigger and bigger "maximum range" figures for their products, with the distances claimed bearing less and less relationship to what customers will usually achieve in normal conditions of use.

They know that the typical uninformed customer, looking at several models of radio on the shelves in a shop, will see that one box claims a range of "up to 3 miles" and another says "up to 8 miles" and choose the one with the biggest number of miles.

When in fact, the radios usually have the same power output and the same size of aerial, and so their real "ranges" will be very similar - they are subject to the same laws of science and nature, one company has not invented a unique magic technology that the others don't use.

We prefer to be honest about what is likely or realistic in terms of radio range.

LEARN MORE ABOUT TWO-WAY RADIOS AND RANGE BY CLICKING HERE

Or watch this video:

Our Walkie-Talkies & Accessories For Hire