Using Our Hired Walkie-Talkies With Other Radios

WILL YOUR RADIOS WORK WITH OTHER MAKES AND MODELS OF WALKIE-TALKIE?

We are often asked if our hire walkie-talkies will be "compatible" with a customer's own radios, or with the radios used at a site or venue that they will be using.

The answer to this question requires a brief explanation of how radios are set to use different frequencies.

Radios Can Use Hundreds of Different Frequencies

The radio user just sees a "channel selector" control knob on the radio, allowing the user to select one of (usually) 16 "channels".

But each one of these "channels" can be set to one of many, many actual frequencies.

All professional walkie-talkies can be programmed to use any of thousands of frequencies. Most can be set to use frequencies between 420 - 470MHz.

Walkie-talkies are usually programmed by the supplying dealer, using PC software, and a programming lead that connects the PC to the radio via the earpiece/microphone socket. 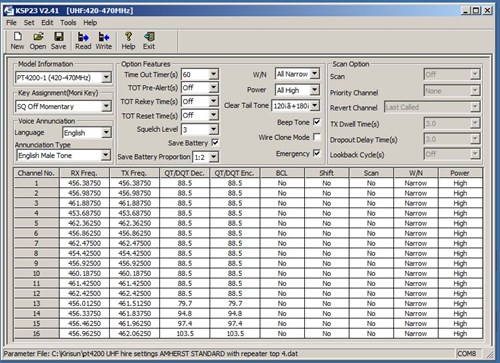 To the left is a "screen shot" of the programming software used to set up our hire walkie-talkies. Click the image to see it larger.

Each make and model of radio on the market will have a similar program.

Each one of the radio's "channels" can be set to any frequency within the radios frequency range.

Most radios can be programmed to work on the same channel as each other.

But you need to know what frequencies the "other radio" is set to use in order to program ours to match.

Using The Same Brand or Model Does Not Guarantee "Compatibility"

You can not assume that if you buy or hire radios of the same type as some existing ones, that they will "talk to each other".

Two identical radios could be programmed differently, and so would not communicate with each other, in spite of being the same make and model.

What To Do If You Want Our Radios To Work With Others?

Our hire walkie-talkies are set to a group of frequencies allocated by Ofcom for use by radio hire companies. They will generally not communicate (or "interfere") with radios that are based permanently at a venue or premises.

If you want us to hire you radios set to specific frequencies, so that they will work with some other radios that you already have, you will need to provide us with the frequencies and CTCSS settings used by those radios.

Then we can program our radios so that they will work with yours.

We may make a small charge for this to cover our time in programming them all, and then having to reprogram them back again after you return them to us.

Click the printer symbol for a printer-friendly (PDF) version of this page.

Our Walkie-Talkies & Accessories For Hire